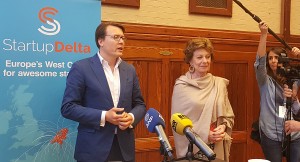 His Royal Highness Prince Constantijn of the Netherlands will succeed Neelie Kroes as special envoy for startups on July 1, 2016, and will lead StartupDelta2020 for the next 18 months.

Minister Henk Kamp of Economic Affairs announced the new appointment, as well as a name change of  StartupDelta to StartupDelta2020, last week during Startup Fest Europe.

“To bring forces together nationally and internationally and to boost the startup ecosystem, I’ve asked Constantijn van Oranje to become the next Startup Envoy. And I am very pleased to announce here that he accepted the invitation,” Minister Kamp said during his speech to announce the appointment.

“No one is better equipped than he to take StartupDelta to the next level. He has a wealth of experience in the European and international arena. He knows the European legislation and the startup ecosystem better than anyone. He has the determination, creativity and leadership required for the job. And − most importantly − the startup mentality.”